The Anse Royale district lies in the south of the Mahe island and is approximately 30 km from Victoria (Capital of Seychelles).  The total land area of the district totals to approximately 709.9hectares and stretches from the coast to the mountains.

The district borders with several other districts, namely the Au Cap district in the North East, the Anse Boileau district in the North West, Baie Lazare in the South West and the Takamaka district in the South.  There are approximately 17 sub-districts or zones at Anse Royale.
According to the 2002 Census Report, there are 3688 people living at Anse Royale, a figure which represents 4.7 % of the total population for the whole of Seychelles
Previously the main economic activity at Anse Royale was agriculture and fishing; however this is now shifting to the more commercial activities as well as tourism. A total of 28.56 hectares of land are currently being used for agriculture.
Restaurants in the district include the Jardin du Roi, Kaz Kreol and the La Baie Royale restaurant.

The district is the only one in the Seychelles with an active Eco-Tourism Committee. The main goal of the committee is to promote eco-tourism at the district level. Recently a designated area in the district has been chosen to become the beach park. The total size of the chosen are is approximately 290 meters in length and 50 meters in width. Work to construct facilities in the park of which people can make use is on-going.  Upon its completion the Beach Park is expected to become an area where families and friends can make use as recreational area. The Beach Park will be the first of its kind in the Seychelles and it is one of the projects which have been initiated by the Eco-Tourism committee of the district. Facilities such as barbeque stands, benches and tables, and public toilets will also be installed and made available for the Park users.
The district is also expected to benefit with the formulation a new Land Use Plan being worked upon by the Ministry of National Development. However, the plan is yet to be finalized. Upon its completion it will demarcate the different zonings for the district. 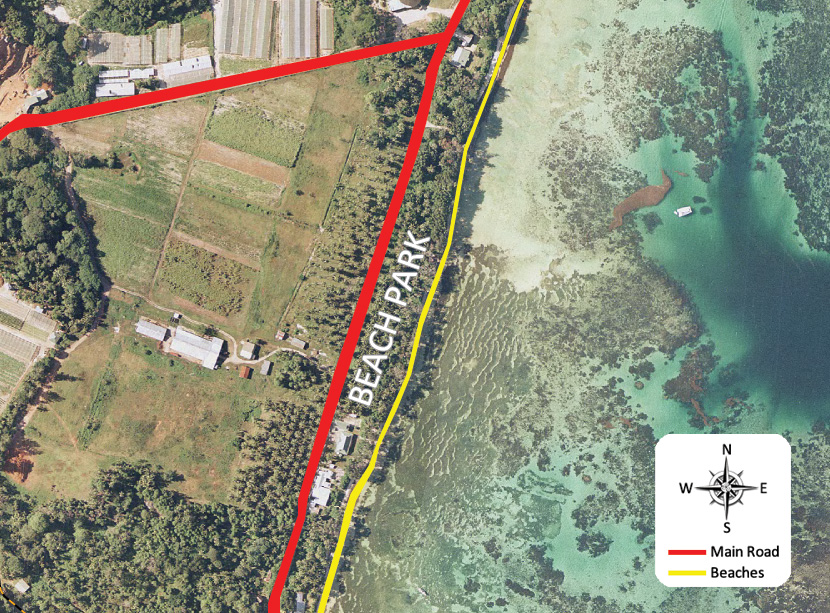