The major wetlands event held here last week has shown the commitment of the Seychelles Government and people to protect their “green gold” – the environment.

There were also stakeholders who sponsored the event and other high government officials.“The last six days have been a clear testimony to our government’s and people’s commitment to protect our green gold, our environment,” said Mr Dogley.

“There has been a large turnout for all activities and I have been personally overwhelmed with the amount of goodwill and interest our people have shown.” 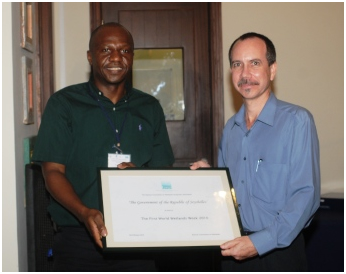 But Mr Dogley said we cannot rest on our laurels; we must all continue with our campaigns to convert more minds and souls, so that one day we can speak with one voice to protect some of the richest ecosystems on this planet. “I know that we have been able to demonstrate that wetlands are not equal to wastelands but important natural systems that we human beings need so as to thrive and prosper,” he said.

Mr Bamba said the week was also an occasion to see the major role that youngsters play in the success of wetlands conservation in the country.

“We encourage them to keep up the good work that they have started, as the future of Seychelles depends on them,” he said.And he thanked all businesses who have worked with local communities and the government for the sustainable use of wetlands.All sponsors for the week’s event – celebrated under the theme: Wetlands connect life and culture – received certificates from Mr Dogley to recognise their active involvement in the various activities.

More in this category: « Official launch of TESS website Wetlands seminar to boost national environment plan »
back to top
template-joomspirit.com
Back to top